Sultan is the leader of the Bandits in the Zone in S.T.A.L.K.E.R.: Call of Pripyat. Under him, the Bandits are reorganized into a darker, more cohesive, and more secretive group making deals with former enemies and making new ones in their place.

According to himself, Sultan has been through a lot of trouble. When at high school, Tolyan, his closest friend, became addicted to narcotics, quickly going from cannabis to heroin and, finally, cocaine. Apparently, he eventually overdosed, due to taking drugs of a very low quality. Sultan decided to avenge him, by tracking down and killing his dealers. He was soon caught by the police and imprisoned. While incarcerated, he took part in the more violent prison gang wars where he was, apparently, stabbed in his stomach with a shiv.

After being released, he tried starting a "business," but was soon rearrested. After being freed, he decided to "leave all that shit behind" and set his sights on the Zone.

There, he joined the Bandits, rising through the ranks rapidly, eventually becoming the kingpin.

His direction is quite different from that of his predecessors Yoga and Borov. Under his leadership, the Bandits are more clandestine and operate more surgically with a more centralised command structure (though there are more autonomous branches such as the cells commanded by Jack and Shishak in Yanov). In general, they are less chaotic and aggressive and are even open to negotiating as evidenced by Shishak's preference to avoid unnecessary bloodshed.

Sultan espouses his ideal of the Bandits being more than petty thieves and murderers, instead viewing them as enforcers for his peculiar brand of order.

Sultan is constantly trying to take control of the Skadovsk from Beard and his compatriots, using tactics ranging from being merely illegal to outright violent. In this turf war, his connections come in handy, such as his alliance - of sorts - with Owl.

Other illicit activities masterminded by Sultan are: trading artifacts for weapons with the corrupt Duty supply officer Morgan; purging the Loners taking refuge in an old shipwreck with a strike team led by his bodyguard Knuckles; sending one of his men to Yanov to execute the debt-ridden Snag; and trying to trim Beard's supply of "Svarog" Detectors. Often, the player gets to choose whether to aid Sultan, go against him, or ignore him entirely.

If the player sides with Beard, Sultan will quickly lose power and bandits in Skadovsk or in the wild in Zaton will become a rare sight. 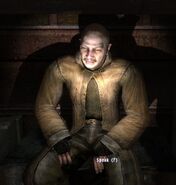