The Svarog Detector is a prototype anomaly and artifact detector featured only in S.T.A.L.K.E.R.: Call of Pripyat. It is the most advanced detector in the Zone.

The Svarog is not a mass produced device - it is a marvel of engineering constructed by Novikov in the employ of the Ecologists. It features expanded functionality compared to the regular Veles detector - apart from a program used to identify static areas of anomalous activity and detect artifacts, the scanner can detect anomalies not analyzed by scientists yet; one of the main features Novikov added to the device.

Unlike the Veles detector, the Svarog detector displays anomalies on the LED display, as well as artifacts, making artifact hunting much easier and limits the use of bolts to discharging certain anomalies, or to finding the limits of larger gravitational anomalies such as the Whirligig or Springboard, which might not be accurately depicted on the screen.

It can also locate a larger variety of artifacts than the Veles detector, and can even detect artifacts far away from anomaly fields, even inside buildings.

Artifacts are now shown as tiny green dots on the LED display, sometimes being hard to see, particularly with night-vision, or being near a cluster of anomalies, usually covering the tiny dot. However, some artifacts, such as Flame, Firefly, Night Star are shown as bigger dots, thus being able to be seen (the larger the dot, the more financial value it's worth). Despite these minor flaws, the Svarog detector is the best in terms of artifact hunting and navigating through anomalies.

The Svarog detector also sends out a frequency that causes Space anomalies to become unstable and explode. This can be seen in a mission from the Ecologists the player can take on after the previous ones have been completed.

Svarog is the Slavonic pagan god of blacksmithing and fire.

In order to acquire the Svarog detector, the player must have completed The Hit and Transaction missions. After those missions are complete, Owl has another mission, Tempting Business which requires the player to bring three Veles detectors to Novikov. (Note: Completing the Mercenary Camp mission is not required to unlock the Tempting Business mission.)

Once Novikov has all three Veles Detectors, he must tinker with them and then send the prototypes to Owl. The two Svarog detectors are given to Beard's stalkers; Sledgehammer and Crest. In a turn of events the third one is given to player by Beard.

Another sure way to get a Svarog is maxing out your reputation with the Ecologist faction, earning the Research Assistant achievement. Once you have done so, Professor Hermann will sell Svarogs constantly if one keeps coming back, the price depends on how many missions are done for the scientist.

Alternatively, with A Wealthy Client and Pioneer Achievements, Hermann will sell a prototype Svarog detector. For all intents and purposes it is a fifth Svarog detector, but completing Owl's quest is unnecessary, though it is appropriately expensive even with the Research Assistant achievement. 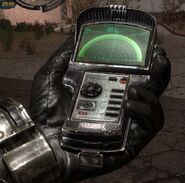 Svarog detector working
Add an image to this gallery

Retrieved from "https://stalker.fandom.com/wiki/Svarog_detector?oldid=69177"
Community content is available under CC-BY-SA unless otherwise noted.