A light rifle with an effective fire range of up to 300 meters. Due its to[sic] exceptionally easy triggering, high ergonomics and low weight, the weapon is highly accurate, though it is too sensitive to dirt and is not always suitable for use under difficult field conditions.

The TRs 301 is one of the first 5.56mm weapons the Marked One will come across, easily found within the Wild Territory, as it is used by most Mercenaries in the area. It suffers from mediocre reliability, but has terrific accuracy, reasonable stopping power, and is very lightweight. It can also mount all the attachments found in game, making it fairly versatile.

It is a decent weapon to use in the early parts of the game due to its good overall stats, with its low reliability as the main drawback.

In Shadow of Chernobyl, the weapon is the primary weapon of most experienced Freedom members, Veteran Loners and Monolith members. It is also widely used by the Mercenaries.

The weapon can mount a SUSAT scope and silencer without any upgrades, however a modification is needed for it to mount an under-barrel M203 grenade launcher. It is inexpensive to maintain, and uses the same upgrades as most 5.56mm class assault rifles. It tends to jam more than most rifles, but is still a good deal more reliable than the IL 86. Firing the weapon in 3 shot bursts or in single shot will reduce the rate it is damaged firing compared to it being fired on full-auto all the time. Overall, due to poor reliability it loses with Eastern weaponry available at the moment when the player will first encounter the TRs 301.

In Clear Sky, this weapon is often employed by Freedom members, experienced loners, veteran loners, and is in abundant use by the mercenaries.

A new step in the development of this famous weapon family. The changes were made to the upper half of the steel construction comprising the barrel, gas tube and bolt assembly, reducing the weapon's weight, improving ergonomics and its gas system. The weapon is highly accurate, although its propensity to catch dirt makes it a poor choice for the Zone's difficult conditions.

Its rate of fire is higher than most other rifles, the accuracy is better than the IL 86, and the handling is on par with the Viper 5. It also weighs less than most other assault rifles, and is one of the two assault rifles that can accept a scope, silencer, and grenade launcher by default (the other being Strelok's SGI-5k), making this weapon one of the most versatile weapons overall. However, due to Strelok's SGI being an unique weapon available in stashes, the TRs 301 is a great counterpart to use in the early game.

It can even surpasses SGI 5k in term of DPS due to its rate of fire, but it has some drawbacks – it has low durability without upgrades, which rapidly deteriorates its accuracy and recoil. In fact, out of all weapons in the game it is the most affected by wear, and it has the lowest durability of any assault rifle.

Keeping it in top condition is a must as once its durability is reduced by 1/4, it will start to jam very frequently and often in the most inconvenient of times such as during a heated firefight. Durability damage rate can be lessened by firing the weapon in single shots or in bursts of 3.

Overall, the TRs' reliability is still better than in Clear Sky and not much worse than other weapons and thanks to many advantages of using this weapon, it may serve as the player's main weapon, until they manage to get a higher-end weapon.

The TRs 301 has a large amount of upgrades. The mag capacity can be upgraded to 40 rounds, and the weapon has a fair amount of fire rate, accuracy, flatness and reliability upgrades, making the weapon more powerful, easier to use and more useful at long range.

The TRs-301 is used almost exclusively by experienced Loners, Monolith and Mercenaries operating throughout the Zone, making it fairly easy to obtain one early on. Some Freedom members, mostly Experienced, make use of the TRs alongside the IL 86. It is commonly carried with an attached scope and/or silencer.

Originally the LR-300SFR (Special Forces Rifle) variant was available. (The LR-300 SFR had a 14.5 inch barrel and a full-auto mode like the M4A1). It was supposed to accept the PSO-1 scope, GP-25 Kostyer grenade launcher, and silencer attachments.

With the scope and grenade launcher.

The world model as seen in all games. 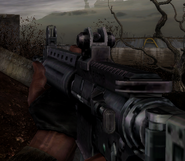 A TRs 301 with the silencer and SUSAT scope attachments.

A Clear Sky stalker holding the weapon with the silencer and SUSAT scope attached.

Another Clear Sky stalker holding the weapon but only with the silencer attached. 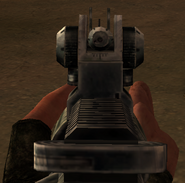 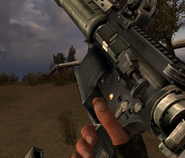