A Western model of a tactical helmet that lacks camouflage. It is not known how it made its way into the Zone. The helmet is designed to provide a squad leader with strategic superiority over the enemy via its many scanners and satellite communications devices, which have not been installed in this particular helmet. Comes with multi-layered Kevlar protection and armored elements to protect electronic components. Includes a respirator and a first generation night vision device.

The Sphere-08 is a high quality Western-made helmet, designed to give the operator strategic superiority over the battlefield via scanners and satellite devices (however, they are usually not installed in helmets available in the Zone). For protection, it uses multiple layers of Kevlar and hard armor to protect electronics. Usually comes with a gas mask and first generation night vision by default.

It is the standard issue helmet for Spetsnaz operators in the Zone and an integral component of the Berill-5M armoured suit[1], as well as Freedom veterans wearing the Guardian of Freedom suit.

This helmet is worn exclusively by Freedom and the Military. Compared to the earlier helmets, it is of superior quality in nearly every regard, though the Curtain helmet offers better protection from anomalies and the Sphere M12 helmet offers slightly better overall protection.

Only Nitro can install the final NVG upgrades and only Novikov can install the appropriate anomaly protection upgrades. It can be upgraded to a 'second generation' NVG, which can be made more useful still by adding an Infrared Scanner, allowing the player see hostile humans on the minimap when close. 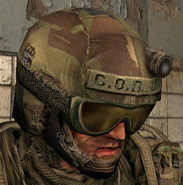 A Sphere-08 helmet worn without the gas mask, but with goggles 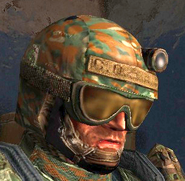 Freedom variant of the Sphere-08 helmet. Without gas mask aswell. 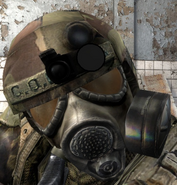