This does not, yet, belong in the wiki or even the notes of the article, but I think it is worth playing with the idea.

I actually think that Noah IS Doctor. 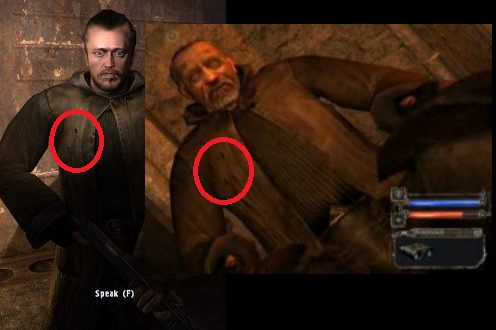 there is just so many obvious hints that they are the same person.

the question is how did Doctor manage to revert his age and did that cause his madness? SpaceTurtle 02:55, February 15, 2010 (UTC)SpaceTurtle

Thats a pretty cool analogy, they do look similar. The leather coat looks like that with all stalkers though. They do look similar, but doc is pretty old and wrinked, also this takes place after ShoC. Maybe Noah is Doc's son or something?Kewlcrayon 02:59, February 15, 2010 (UTC)

I haven't seen a "light" brown leather trenchcoat like this one on another character in CoP, maybe I didn't pay attention. Will look for other characters with the same outfit.

But I just thought it is the same person, because there were myths around the "Doc" character from SoC, that he was one of the first stalkers, found the Wishgranter and received the ability to heal every living being but he can't differenciate between mutants and humans anymore.

Of course his behavior in SoC showed that it was indeed a myth, but like every myth there might be some grain of truth.

He found 2 Compass artifacts, which are supposed to be ultra rare and can only be found in Space/Time (space bubble) anomalies (as seen in Clear Sky).

Maybe he found an anomalous place or artifact that turned him young again, but as a side-effect made him lose his mind.

Noah and Doc both have a Pseudo Dog. No other character tamed one. Both tend to keep to themselves and live away from other stalkers.

Doc in SoC lived in the Swamp alone, Noah is in his Ark. I guess "other" stalkers named him Noah according to his new home in lieu of knowing his real identity, which at this point he probably forgot in his madness(amnesia?!)

Another fun fact is that when Strelok finds Doc in their Hideout in SoC he is greeted by the trap in the pipe entrance.

This might be a wink to Noah greeting you in a similar lethal way when you try to enter the Old Barge. This is of course a coincidence, but at the same time maybe a little wink by the developers.

In CoP it is revealed that only very experienced Stalkers like Strelok know about the detailed nature of emissions/blowouts rearranging anomalies.

So Doc probably knew about the "big" emissions like seen in CoS and CS at one point that they can also increase mutant count in the zone, maybe that is what Noah is referring to that the waves of mutants will increase. Maybe it is some fragment of Doctor's knowledge that Noah can't really put together anymore because the rejuvenation affected his mind and memory (everytime you enter he asks who you are, so his memory probably doesn't last more than a few hours, or less). That creates the extreme paranoia and fear of the zone in him, all the knowledge about the zone and no idea what to do with it or process it.

Another hint is that if you close up on Noah's face, you see that it is really young and soft. Other stalks have scars and wrinkles, even the younger ones.

And despite this appearance he can navigate around anomalies like nobody's business (cutscene at the plateau) and find very rare artifacts like nothing.

A similar character in CoP is Vano, who is known to find his way through anomalies easily, but he looks much older and much more experienced. Hell just look at Strelok when he started out with his group and look at him now after all that happened. They aged really fast through all the shit the zone has thrown at them.

Noah's face, despire the beard, is like a newborn baby, to exeggerate a bit. Yet he has the skills of a legendary stalker like those in Strelok's old group.

That actually makes alot of sense after you put it like that, you've got some thinker for figuring things out haha. Its still hard to believe hes Doc though. I mean, alot of stalkers possess certain abilities, and Noah being able to navigate makes him more similar to Guide? Or Forrester? Maybe Noah is an aquaintence of Doc, and his tame psedodog was docs, also the compasses were docs. Although Noah has some resemblences to Doc, I see Noah has a widows peak hairline. Still, there must be some significance about who Noah really is. Kewlcrayon 04:44, February 15, 2010 (UTC)

Damn you are right, so does Owl. Well still Noah is a stalker = loner faction, and Owl and Sultan are considered bandits. Guess I was wrong about the trench coat. They all got the same 3 holes on the top left side. Meh I thought that was the biggest clue, but now it seems it was a bit lazy on the developer's side. SpaceTurtle 04:50, February 15, 2010 (UTC)

The game calls Owl a "Stalker", but he does side with the Bandits. Of course Noah isn't Doc, the developers just wanted to put in another mysterious and similar character. Boredgunner 05:18, February 15, 2010 (UTC)

Well, Owl is a loner, that for sure, he's just doing a mutal bussiness with Sultan, like Snag. But Noah is a bit strange, cuz when I got my One of the Lads and Friend of Stalker achievement, he's still neutral to me, wonder why?Marian Cross 07:07, February 15, 2010 (UTC)

I think we should post something that tells the player what Lassie does inside Noah's ark and what will happen if the player kills Noah.

Nice theory. but its just an original model used by creators of the game.. everyone has that bandit robe with same textures and such they just replace heads with of other charackters.. allthow whould be really cool if Noah was a Doc. Wonder if Strealok did that by destroying the C-Consciousness. Time loops back ?

Retrieved from "https://stalker.fandom.com/wiki/Talk:Noah?oldid=45878"
Community content is available under CC-BY-SA unless otherwise noted.