The Tourist's Delight (or Tourist's breakfast) is a type of recovery item that appears in S.T.A.L.K.E.R.: Shadow of Chernobyl, Clear Sky and Call of Pripyat.

A can of military rations taken from an army depot raided by Stalkers, one wonders if it already gone past its expiration date. It is capable of satisfying hunger and partially restoring some of the player's health.

Canned food from an army warehouse raided by stalkers. The best-before period hasn't expired yet.

The item is popular, fairly widespread and can be found practically anywhere in the Zone.

Each consumption will restore a portion, equivalent to about 1/5 of the player's health bar. These are generally available from Barman who will normally sell it for 300 rubles a can, and also found in several stashes. Several more experienced stalkers might also carry and sell it. 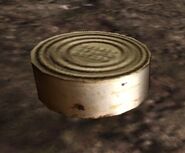 Now referred to as the Tourist's Breakfast, it's available at a low price from traders like Beard and Hawaiian, and is normally carried around by experienced stalkers. The Tourist's Breakfast is also most practical, restoring as much hunger and health as other foods, but being the lightest of them all.

An image from the CoP official site.
Polski Русский Українська
Community content is available under CC-BY-SA unless otherwise noted.
Advertisement