Tremor (Тремор) is the designated medic of the Skadovsk in S.T.A.L.K.E.R.: Call of Pripyat.

Tremor was formerly a doctor or surgeon in the Ukraine - for reasons unknown he decided to enter the Zone on his own in hopes of getting away. He came upon the Skadovsk and quickly became a trusted and valuable addition to the crew, and seemed to take Beard's side in the conflicts between him, Sultan, and Owl.

Tremor is only found aboard the Skadovsk, in his office across from Owl's shop. He's a rather kind person, and shows a great deal of concern for people who are injured, but seems flighty and nervous, always avoiding company. He has a certain fixed price for his goods - lower then any other medic - and does not charge to patch the player up if he comes in wounded. In the hunt for the missing Hunter, Danila, he can be seen talking to and asking about the wounds of other stalkers in the area - asserting that blood has been sucked from the victims, and only a bloodsucker is capable of such an act.

Shortly after this questioning he will leave Skadovsk for parts unknown, and the people inside did not seem to notice his departure - Owl takes over his medical supply business. Eventually, the player is tasked to find Grouse, who has gone missing after discovering something amiss near the Port Cranes. Upon making their way to the cranes, the player will find Danila dead in front of a shack, and upon opening the door is confronted with Tremor tending to a deceased Grouse.

In the North American and UK release, Tremor has a different backstory than the one told above. Tremor claims he suffers from a hemoglobin addiction, one he was unable to effectively control. Before coming to the Zone, he worked at a surgeon's clinic and was able to satisfy his craving by consuming surplus donor blood. Tremor came to the Zone hoping that the harsh environment would force his addiction to the sidelines, but instead he experienced the worst craving of all and could think of nothing else. He decided to make his killings look like bloodsucker attacks and usually targeted already wounded stalkers. Grouse figured out what was going on and attacked Tremor, a battle which Tremor obviously won.

The player can interrupt his monologue at any point and either let Tremor commit suicide, or shoot him. This awards the Detective Achievement.

You didn't get anything, nobody will ever get me.... 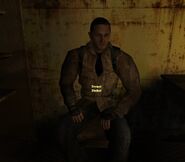 Character is a huge resemblance to Vasili Livanov.
Add an image to this gallery
Retrieved from "https://stalker.fandom.com/wiki/Tremor?oldid=53159"
Community content is available under CC-BY-SA unless otherwise noted.