This assault rifle combined with a grenade launcher, which is similar to the AKM series, was specifically developed for rapid response units. The main differences are its 9x39 caliber ammunition, bullpup layout and extensive configuration options. This weapon is highly valued by military stalkers due to its ability to kill enemies wearing body armor behind improvised cover at a distance during urban combat, as well as its excellent stopping power.

In Shadow of Chernobyl the Tunder S14 isn't as widespread as most assault rifles. The Tunder was the weapon of choice of most Duty veterans and experts. Spetsnaz experts may use this weapon, along with Military Stalkers. The Tunder is very accurate at close range and fairly accurate at long ranges, in the right hands one could pop headshots at long ranges using the iron sights. The weapon itself is very powerful and could easily rip apart the armor of an Exoskeleton. Combined with its grenade launcher, it's a weapon for all occasions. Its only drawbacks are that its small magazine limits its firing rate, it has lower accuracy than other high-end assault rifles, it is very prone to jamming, and most of its ammunition is heavy weighing at .70kg per box which would also restrict the player from carrying lots of equipment.

The Groza is an overall great assault weapon, where it can be upgraded for superior firing rate and stability and its magazine can also be expanded by 10 rounds. It can also be upgraded to use 5.45×39mm rounds instead of 9×39mm rounds, making it a more economical weapon, though the 9×39 ammunition has much better armor penetration. The underbarrel grenade launcher gives user options and when fully upgraded, the Tunder can obliterate unlucky stalkers at close range in a matter of seconds. The Groza only has one upgrade tree instead of the usual two for assault rifles and has no "accuracy" upgrade tree, only the rate of fire upgrades. It can accept a PSO-1 scope and silencer by default, though it makes a poor sniper analogue since it has no accuracy upgrades and unimpressive base accuracy.

Unlike in Shadow of Chernobyl, the weapon is extremely rare. It's almost exclusive to the Duty faction, and it is only held by Duty's powerful Exoskeleton units. Generally, to get it without killing a Dutyer, the player can only get one in the following instances:

Fully upgraded, the Tunder S14 has the fourth highest firing rate, just behind an upgraded RP-74, GP37, and the FT-200M.

The Groza returns in Call of Pripyat as, once again, a rare assault rifle. Duty forces rarely wield the weapon, and Military units instead rely on the AC-96/2 and the SA Avalanche for assault rifles. Loners will not wield the weapon until much later in the game, where it can be sometimes found in the hands of those wearing Exoskeletons. One, however, can be found in Morgan's Duty cache. Ammo can be rather scarce, the best place to acquire the ammunition is in Pripyat, but if one completed Trapper's mutant hunting quests, ammunition will be deposited into the player's personal locker in Yanov daily, including 9x39 ammunition.

The Groza now cannot sport nor be upgraded to mount a PSO-1 scope as it did in Clear Sky, which limits its potential effectiveness at long range, although it can still mount a silencer. This is offset by the fact that the Groza is one of the best close-quarter combat weapons available. Its caliber, paired with its high damage, manageable recoil and firing rate make it a great weapon for urban combat and the integral GP-25 Kostyer makes it even more deadly against clusters of enemies and against dangerous mutants like the Pseudogiant and Chimera.

However, the Tunder has surprisingly low reliability (probably lowest from any Warsaw Pact weapons), making it a questionable choice for player who wishes to compromise power, accuracy and reliability of his weapon and also due to very heavy ammunition (30 9x39 bullets weighs 0.7 kg, 4 times more than the same amount of 5.45 and NATO bullets), one may prefer to use a 5.45 or 5.56 weapon instead.

A unique Tunder, called the Storm, can be purchased from Nimble for 20,000 RU. Like the unique variant in Shadow of Chernobyl, it is calibrated to fire 5.45×39mm rounds, with a higher rate of fire and appropriate bullet velocity to compensate for the drop in damage. It is also more reliable than the standard Tunder S14, though strength-wise, it is less powerful than the standard Tunder due to the former's weaker 5.45x39mm rounds. The Storm can now mount a PSO-1 Scope or any other Warsaw Pact scope by default, and with upgrades, it is arguably the best Warsaw Pact weapon in the game and can compete with the higher-end NATO weapons, despite its weaker caliber.

Depending on the player's choices, the Tunder can have the highest rate of fire out of any weapon while sporting favorable accuracy. Unfortunately, the upgrade tree is very Tier 3 heavy, which means the player will not be able to unlock Groza's full potential before reaching Pripyat and getting the Calibration Kit.

The Groza is one of the first weapons that appeared in the S.T.A.L.K.E.R. series. It appears as a usable weapon in Build 1098 with a completely different model, but disappeared until Build 1935, where it appeared with its final model.

Also, in Build 1935, its reload speed was almost as slow as that of the SVUmk-2 sniper rifle. It was sped up in the final release, likely due to its high firing rate, low magazine capacity, and assault rifle balance.

The Groza in earlier builds 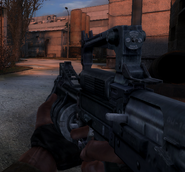 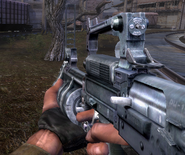 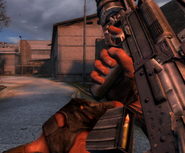 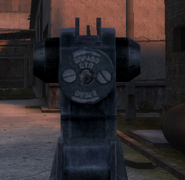 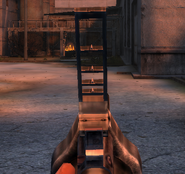 The weapon's World model seen in Clear Sky and Call of Pripyat. Note the now brown synthetic parts compared to Shadow of Chernobyl.