A reliable weapon. As a quality compact close-range weapon, it is very popular among the Zone veterans.

The UDP Compact has significantly better firing rate compared to other .45 caliber pistols and very light, weighing less than 1.00kg.

However the UDP seems to be susceptible to jamming, which makes it slightly unreliable in extended firefights.

In Shadow of Chernobyl, the UDP is heavily employed by veteran and Expert Freedom members as their sidearm and sold exclusively by Skinflint.

Can be also obtained from Goodies in the safe stash in Red Forest.

It is used as a sidearm by the following characters: Barin from Duty, Charon from Monolith, Father Diodor of Loners, Leshiy, Lukash and Murk from Freedom.

In Clear Sky, the UDP Compact is used by expert members of Freedom and some experienced members of the Mercenaries and veteran Loners . It is still very light, weighing at less than 1.0kg and its magazine can be expanded by 4 bullets to have a total of 12 bullets per magazine. It has a better firing rate than other .45 caliber pistols and retains a degree of accuracy and power, though not as powerful nor as accurate as a Kora 919. Most technicians can upgrade the weapon.

It is sold only by Ashot, though you can salvage one early in the game while fighting the mercenaries in the Dark Valley. The player can only buy this pistol from Ashot after attaining a friendly reputation with Freedom. It can be retrieved from a Dangerous stash in Red Forest.

Impeccable reliability and durability combined with excellent accuracy are the main noteworthy features of this weapon. Its minor drawbacks include its considerable size, relatively high center of gravity and massive bolt, which make it difficult to conceal but do not outweigh the weapon's positive features. The weapon is especially popular with the Zone's veterans.

In Call of Pripyat, the UDP Compact is used by Mercenaries, Loners, Freedom and sometimes even Zombified Stalkers. Nimble sells an unique UDP called March which used to belong to a mercenary named Wolfhound. It is one of the pistols that can be modified to have a new firing mode – in this case, fully automatic. It is the only .45 caliber pistol with this upgrade. It can also mount a silencer. 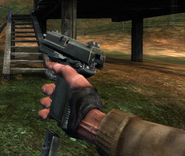 The weapon's world model as seen in all games. 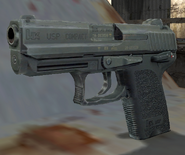 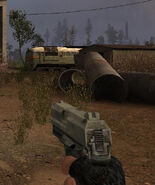 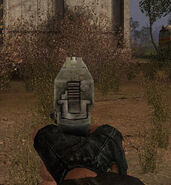 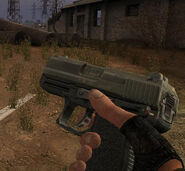