The Urchin is a rare artifact featured in S.T.A.L.K.E.R.: Shadow of Chernobyl.

The anomaly Burnt Fuzz very rarely gives rise to this artifact. Blood pressure rises, the body gets rid of a large amount of red blood cells. But along with them the stored radiation leaves the body as well. In his fundamental work titled "Ionization and polarization of the components of rare artifacts", Sakharov noted that the content of this formation has a critical stability, and it's not realistic to create such an artifact in lab conditions in the next ten years.

The Urchin reduces irradiation by 30% in exchange for a 100% increase in bleeding.

The Urchin can be found in the Agroprom Underground in the long corridor with an elevated platform running along one side. The Urchin normally appears at the center of the platform but may vary its position significantly. It is also given as a reward by Lukash for each of the optional missions Destroy the neutral stalker and Protect the Border. A secret stash in Yantar contains this artifact; the coordinates can be acquired from dead Stalkers in the Wild Territory, Yantar, or the Army Warehouses. Auto-secret stash in Army Warehouses contains the artifact.

According to Professor Sakharov, all of the suits used by the Ecologists were saturated in a lotion, with the Urchin being an ingredient. He says that this gives the suits excellent protection against radiation and he requires one in one of his jobs. In return, he will give the player a SEVA Suit, or on rare occasions, 10000 RU and several Scientific Medkits. 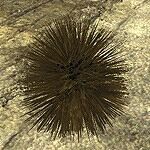