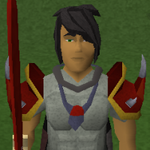 Hello there, I am Denko, I am a huge fan of S.T.A.L.K.E.R., Half-life and the Halo series'. I am a 13 year old (too young for those highly rated games), and I edit other wikis, being the most edited of them is the RuneScape wiki and the S.T.A.L.K.E.R. wiki. I am a true nerd in weapons, I select my favourite load out as the M110 SASS Sniper Rifle (Semi-Auto Sniper System), and the HK MP7A1 as my secondary weapon/pistol, Gerber LHR Combat Knife, F1 Grenade (for its huge radius).

By some miracle, I found out about ShoC on Wikipedia and Gamespot, so I couldn't wait out for the game to get released, after it was released, I pirated it, and I played it for a bit, and I felt it was too hard for me, I tried to finish the first mission, with vain, and finally I did it, I got lose trying to find Nimble, hehehe, but then I got hold of the game, I stopped half way, copied the personal files (scrnshts, saves, controls), went down to the store next block, and bought an official ShoC, I was really happy, so I installed it and then started playing with my old saves, until I finished the game. By the time I did, I still play ShoC over and over again, until I smelt like a garbage can full of dead mutated fish, I took an anti-rad bath, then started modding the game.

I kept on days, in fact weeks, watching when will the game be released, once it did, I waited a few days playing RuneScape, then I went down to the same store I bought ShoC from, I bought Clear Sky, from there, went back to my house running, and installed the game quickly. And started, the game's plot was a very loosely, like the last one, the hero gets hit by something, and goes in a daze, but this was a much different plot. Of course I was confused when I did NOT know that this is a prequel. But after a few days I did. The game unfortunately was a haven of bugs. And I got millions of bugs and crashes, that my game even stopped working at a point...Quite sad.

The best one in the whole S.T.A.L.K.E.R. series, I bought the original one and even got the U.S Collector's Edition (I don't live in the U.S, but in Canada, although the store I go to is American), and it wasn't what I expected but it wasn't bad, it was a 2 posters, one of was a map of the zone, and some stickers. But, the game was bug-free, and it was excellent, I heard about the Golden JoyStick awards, in the ultimate game of the year, I vote for CoP, unfortunately I don't know if they've won or not. Now, I made a mod and released it on FPSbanana, I was working on it for 4 months, I originally made v0.1, then went on, the correct, bug-free, working one is v1.0, the mod lets you customize your character (name, faction, avatar icon, starter items, and icon).

Retrieved from "https://stalker.fandom.com/wiki/User:1337rng3r?oldid=32592"
Community content is available under CC-BY-SA unless otherwise noted.