The 9x19 ammo is a very common round, making it a useful weapon against rookie and experienced stalkers equipped with sub-par weaponry. However, it will eventually outlive its usefulness due to its low powered nature, though it is still useful against most mutants due to its good stopping power and high fire rate. While the 9x19mm round is available in FMJ varieties, the round still does little against adversaries wearing medium armor or above (example, it will normally take up to 400 rounds to kill an exoskeleton-equipped NPC, on easy difficulty). The weapon is effective against unarmored or lightly armored Stalkers, like Bandits. It is also effective against mutants and is very controllable, even when fired on fully automatic. The weapon is relatively accurate and can be used against certain armored foes if the user can achieve headshots. It may serve as a useful alternatives to shotguns thanks to its range, rate of fire and good performance in close quarters. Its low weight and corresponding ammo's low weight make it desirable as an emergency back up automatic. However, because of mentioned high fire rate, it is the second least reliable weapon in game (surpassed only by GP37) its condition bar relatively quickly depletes, which naturally results in a gradual decrease of accuracy and jamming. Despite this, however, high rate of fire also has its advantages as the weapon being quite effective - it relatively quickly eliminates mutants or poorly armored humans despite low power and penetration of its 9x19mm round.

The player will likely first pick up a Viper 5 at the Cordon near the exit to the Garbage being held by at least one Bandit, it then becomes a common sight weapon onwards the Garbage. It is also sold by Barkeep.

The Viper 5 is heavily employed by rookie and experienced bandits and Loners.

The Viper 5 is a common weapon for Experienced stalkers in the Renegades, Bandit, Loner, and Clear Sky factions as well as some Freedom Rookie stalkers.

It's sold by a variety of traders and ammo for it is common found or cheaply purchased, making it a powerful weapon in the first to mid parts of the game. 9x19 ammunition can be rare at first, but the weapon can be converted by most technicians to fire the extremely common 9x18 round instead and 9x19 ammunition can be purchased from almost any trader. It can be found very early in the game, on a table in the pump station in the Swamps, though sometimes a Renegade defending the area will pick it up. The weapon is also sometimes used by Renegades in the northeastern corner of the swamp, past the machine yard.

It can be upgraded by most technicians and made surprisingly more powerful than assault rifles. However, its lack of upgrades and additional add-ons (excluding the Silencer) will eventually wean its use. It is still however an invaluable starter weapon, especially since it can be modified to use the more common 9x18 cartridge. Compared to assault rifles, like the AKM-74/2 and the TRs 301, the Viper 5 surprisingly has better damage and its accuracy is rivaled by the LR 300. Its firing rate is also slightly higher than the two. However, as previously stated, it only has the same upgrades of the AKM-74/2U, which limits its maximum potential; along with its maximum effective range. Furthermore, its low powered ammunition cannot efficiently penetrate light body armor, making it virtually useless against better armed targets like those wearing an Exoskeleton or a Berill-5M Armoured Suit. Anyone with a bulletproof protection of 30 points can withstand several shots from this weapon before dying. It still remains useful against mutants since they have no armor (the only exception is a Pseudogiant, which has heavy natural armor).

The Viper 5 rivals many assault rifles in stats and against unarmored enemies is simply a better weapon than the AKM-74/2. The 9x19 (or 9x18 with an "upgrade") ammo has low armor piercing performance compared to any of the rifle rounds, however, meaning that the Viper 5 is not particularly effective against armored human opponents, though it remains devastating against mutants. The unique version Frasier fires .45 ammunition and does not have the same problems against armored enemies, though it suffers from a far less common ammunition type.

Upgrades can severely boost its performance as the Viper 5 can be granted a much higher fire rate (with upgrades, it can fire at more than 1000 rounds per minute), accuracy and lower recoil, making it devastating. However, the high recoil and poor accuracy, as well as obstructive iron sights and the lack of optical attachments make it mostly a CQB-oriented weapon.

It is commonly carried by Bandits, Freedom and Mercenaries members. Zombified Stalkers early in the game are almost guaranteed to have at least one copy of the weapon, especially if the player visits the sawmill. It is commonly sold by Owl at the beginning of the game. One can be found in the lower floor of the Waste Processing Station in Zaton along with some 9x19 ammo scattered around, however the area is guarded by mercenaries unless the player wipes them out or wait to go to Pripyat, after what they will vanish. Another one is held by Petruha - when he walks in the anomaly and falls, one can grab his Viper 5 before giving him a medkit. 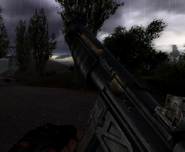 Third-person model
Add an image to this gallery

Third person view
Add an image to this gallery
Retrieved from "https://stalker.fandom.com/wiki/Viper_5?oldid=70270"
Community content is available under CC-BY-SA unless otherwise noted.