Hello brother. Why have you come?

He is a strict and intolerant man with little time to waste, acting agitated and with little patience whenever interacting with the player. [1]

After becoming the leader of Duty, Voronin made a cease-fire pact with the Freedom, essentially an agreement to avoid open conflict. While some rogue elements of Duty disobey these orders, he takes no action against them. He most likely made the pact as Duty cannot hold both their territories and The Barrier at the same time. That being the case, the two factions struck a deal to preserve themselves.

He can be found at the Duty headquarters in Rostok. Note that the Marked One won't be able to access the HQ until after he has been to X16 and talked to the Barkeep. If the player tries to go to Voronin before visiting X16, Duty members in the area will become hostile and fire on sight.

General Voronin is one of the few faction leaders confirmed to still be alive by the time of Call of Pripyat. His only appearance is in Zulu's ending, where he is either given one of Duty's highest titles for his actions in the Pripyat Underground if he dies and also to cover up his defection or sent back to Pripyat with a detachment of Duty's finest if he survives the trip through the underground and is rescued from the School. 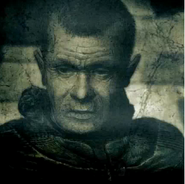