The Whirligig is a type of anomaly appearing in S.T.A.L.K.E.R.: Shadow of Chernobyl, Clear Sky and Call of Pripyat.

A common and dangerous anomaly, which snatches its victims up in the air and spins them at a breakneck speed. The exact nature of the Whirligig remains unknown. The anomaly can be recognized by a light whirlwind of dust above and by body fragments scattered in the vicinity. Victims caught on its outer rim, far enough from the maximum effect zone at the center, can escape the Whirligig with relatively minor injuries.

In game, when one is too close to the anomaly when it is triggered, the Whirligig will violently pull the victim upward, which continues to severely damage the victim until it discharges, and that discharge is powerful enough to dismember the victim's body purely by the sheer force exerted. It is not as easily avoidable as the Vortex and because it elevates its victims into the air, escaping once within the effective radius is practically impossible since jumping and sprinting is ineffective.

Even though the damage done by the Whirligig is less than that of a Vortex, the Whirligig can be considered more dangerous as it is very hard to escape, and the Vortex does have its weak aspects.

The basic characteristics are easily recognizable. When activated the Whirligig discharges as a tornado or whirlwind. Similar to the Vortex anomaly and its idle 'warping' sound, the Whirligig emits a low, rumbling tone at random intervals, which allows the anomaly to be easily told apart from the rest of the gravitational anomalies, provided that it has yet to be triggered.

In the first two games of the series, the Whirligig is the 'middle' of the three gravity elements, stronger than the Springboard but weaker than the Vortex. In Call of Pripyat however, the Whirligig is far more rare than either of those, and can normally instant kill even the most well protected stalker due to its long range and grievous crushing damage (for which there is no direct protection).

Whirligig anomalies are only deadly when they are pulling everything near them until their aerial detonation. Once they detonate, it is rendered harmless for split second, allowing one to pass through them if they are blocking a path for a very brief moment of safe passage before the anomaly becomes active again. Do note that with very careful and deliberate movements, you can walk to the trigger radius of a whirligig anomaly and still be outside its vacuum radius, triggering it but not causing you to be sucked up to it, and allowing it to be inert for a split second for you to sprint past it if needed. Doing a quick save before attempting this is generally a good move to do in the event you fail to do this correctly.

Three of these anomalies can be encountered in Cordon to the north of Rookie village and one to the east of the village, across the road. After that, Whirligigs are a common anomaly, with many found in Garbage, Dark Valley, Army Warehouses, Red Forest and at the Pripyat stadium. A couple of them are also found in Agroprom in the train tunnel, a couple of them are in Bar, and there's one in Lab X-18.

The first Whirligig anomaly is encountered in Great Swamps in Village ruins. Just like in the previous game, they're quite common. A lot of them are found in Garbage, and they're found sporadically in all other locations except Cordon, Agroprom Underground, Hospital, and CNPP. It is also now referred to as a "Meat Grinder" by some stalkers. This is in reference to both the book Roadside Picnic and its movie adaptation "Stalker", where the Meat Grinder is an anomaly that guards their respective versions of the Wish Granter.

Whirlgigs are a rather rare sight in the game. One is a part of the Claw Anomaly, another is floating above the Circus Anomaly, both in Zaton. The third one is located at the School Anomaly in Pripyat. Finally, a cluster of them is found in the Jupiter Underground, though if the player has recruited Vano, he will safely guide the team past them. 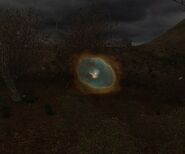 A Whirligig anomaly being triggered by a bolt thrown in the center of the anomaly.

A Whirligig in action.

A number of mutants who have been caught in the Whirligig anomaly.

"Flesh distortion" due to the Whirligig anomaly.
Polski Русский Українська
Community content is available under CC-BY-SA unless otherwise noted.
Advertisement