A light stalker suit produced by the Freedom faction, the Wind of Freedom consists of a light military bulletproof vest with reinforced Kevlar plates, carried over pseudo-flecktarn camouflaged jacket and pants.

The fabric of the suit is treated with a special mixture called Horizon which increases anomaly resistance.

It comes with two oxygen tanks and a breathing mask.

In Shadow of Chernobyl, this is the most commonly used suit for all experienced and many expert Freedom members. It is worn with either a balaclava or a face mask. There was also a gas mask variant scheduled to appear, similar in appearance to the Monolith suit, but it did not make it to the final version besides an unused PDA icon.

The armor can be acquired or found in following locations:

The suit returns in Clear Sky. It is rather uncommon, only being worn by a few experienced outpost squad leaders, one example being Raven, and is always worn with a respirator. The Wind of Freedom suit cannot protect the wearer from anything more powerful than an assault rifle round. Its bullet protection is identical to the Stalker Suit, but its anomaly protection is lacking.

It has the same upgrades used by Tier-2 armors. Apart from the higher price and lower anomaly protection than the Stalker suit, the Wind of Freedom Suit has somewhat lower durability compared to the Stalker suit although it is the lightest tier 2 armor overall. The suit can only be modified by Yar.

In Call of Pripyat it returns again as a standard issue Freedom suit. It offers all around better protection than the Stalker Suit except for ballistic protection which is slightly lower.

It shares most of the upgrades with the Sunrise suit - including the suit weight reducing upgrade (down to an outstanding 1kg) and +10kg carry weight upgrade. Combined with four artifact slots (five if the player skips the +10kg weight upgrade) it's the best choice for players who wish to remain as mobile as possible. 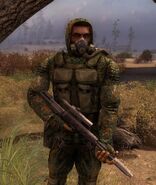 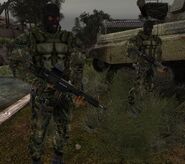 Freedom Members with Wind of Freedom Suits
Add an image to this gallery
Retrieved from "https://stalker.fandom.com/wiki/Wind_of_Freedom_suit?oldid=71039"
Community content is available under CC-BY-SA unless otherwise noted.