watch 02:06
The Loop (Games)
Do you like this video?
Not to be confused with Zombified stalkers.

The Brain Scorcher strips its victim of mind and reason, leaving only an empty, mindless shell.

Cut Text From the PDA Encyclopedia

The Brain Scorcher strips its victim of mind and reason, leaving only an empty, mindless shell. The brainless bodies then turn into zombies, following only the most basic instincts, wandering aimlessly around the Zone without weapons or clothing. Zombies are little more than sluggish walking corpses, caring only about food and sleep. They eat and drink just about anything they can get their claws on but the animation of them eating is not included, hence they are virtually soaked in radiation and toxic waste. Usually they roam the Zone without any apparent purpose, or just lie corpse-like in abandoned buildings. However, as soon as they sense the presence of a human being, they attack immediately. Experienced stalkers have learned to avoid them if they can.

Zombies are typically seen wearing civilian clothing. They are barefooted, walk in a hunched posture with a slacked jaw. Upon noticing a noise in their vicinity or being attacked, they raise an arm in their chosen direction of travel and speed up to a rapid stumble. Their clothing raises intrigue as most personnel residing in the zone wears military gear while these Zombies wear civilian clothing, possibly meaning that some of these were scientists left behind to perish, or civilians who went deep into the Zone or tourists who went to the Zone before the first emission. One Zombie appearance includes a stitched cut running around the cranium, lending credence to the scientific research theory.

There exists another subtype of zombie, referred to as "Ghost". Ghost Zombies are highly resilient, and appear visibly scrambled—the reason for this unknown, although it is thought that the Zone is responsible for warping the molecular structure or molecules of these individuals at a quantum level.

Being left with only the most basic instincts of finding and eating food, Zombies attempt to home in on the player, killing him with melee attacks. A zombie may fake its death once damaged enough, luring an attacker to close on them in an attempt to loot the corpse. The Zombie will attempt this tactic multiple times. Powerful weapons such as shotguns or grenades are effective in dispatching them. 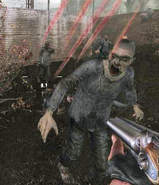 Zombies in Yantar attacking the player. 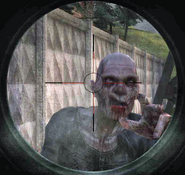 A closeup view of a zombie.

A pair of zombies giving chase.

A zombie homing in on the player.

Both variants of zombies as they appear in the Oblivion Lost mod.

A pair of zombies hung outside Rostok. 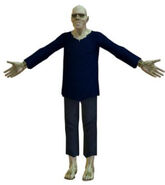 The earliest model of the zombie, as seen in Design Document v1.4.
Add an image to this gallery
Retrieved from "https://stalker.fandom.com/wiki/Zombie?oldid=70959"
Community content is available under CC-BY-SA unless otherwise noted.