Stalkers approaching the "Miracle Machine" Emitter of Lab X16 in the factory complex at Yantar reported that once they get close to the gate, they began to hear voices and hallucinate. Following this they felt their brains literally boiling and melting inside their skulls, and they felt weak. If you are lucky enough to get away from the Psi field with your brain intact, you may also suffer from some detrimental side effects of exposure; for example, some Stalkers reported that they temporarily forgot their names after escaping the factory in time.

As such, zombified Stalkers can be consisted of unfortunate human beings. Bandits,  Loners, Mercenaries, and even members of Freedom and Duty have all fallen victim. They lack the ability to differentiate former foes and are united in a bizarre fashion due to the destruction of their brain functions.

As seen at the end of Clear Sky's events, Monolith soldiers may be normal stalkers that have been 'indoctrinated' or brainwashed into protecting the C-Consciousness and the Wish Granter. Due to the Brain Scorcher's effects and prolonged exposure to radiation and Psi-Emissions, they may lose control of much of their humanity, and this may explain why many appear to resemble zombified stalkers. Many zombies can be seen wearing Monolith uniforms, which suggests that the process that created them causes long term degeneracy and brain damage and the C-Consciousness brainwashing lasts only as long as the victims mind.

Zombified Stalkers do not seem to possess the knowledge on how to avoid Anomalies as they often walk blindly into one and often perish.

However, even though they lack tactical and logical awareness, "idle" zombified Stalkers can somehow run away from a thrown grenade and take cover. For some reason, this isn't present for husks that are attacking.

If not shot in the head but has taken sufficient damage, a zombie Stalker will fall on the ground and continously convulse until finally killed.

Although they are mindless zombies, Zombified Stalkers are actually quite capable with weaponry and can pose a significant threat, even when one is only facing a small number of them. Despite firing their weaponry from the hip, zombie stalkers are quite accurate, especially in large numbers, thus making it inadvisable to get too close for a headshot unless you are undetected. 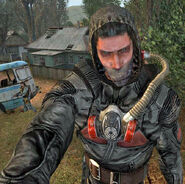 A zombie in Zaton
Add an image to this gallery
Retrieved from "https://stalker.fandom.com/wiki/Zombified_Stalkers?oldid=60083"
Community content is available under CC-BY-SA unless otherwise noted.